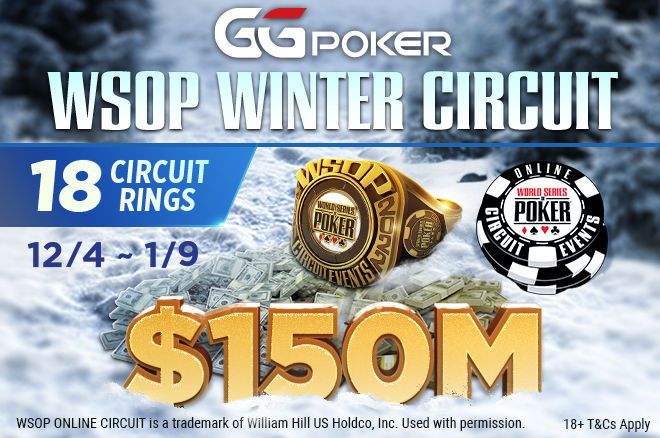 Christmas is coming, the geese are getting fat, and so are the prize pools at GGPoker, who has just announced a staggering $150 million is guaranteed across the WSOP Winter Circuit. In addition to nine-figures worth of guarantees, there are also 18 coveted WSOP Circuit rings waiting to be won. It is going to be a very merry Christmas for some lucky GGPoker players.

On top of the $150 million worth of prize pools and 18 gold WSOP Circuit rings, all champions of ring-awarding events are invited to a live $1 million freeroll in Las Vegas in 2023; the dates are still to be confirmed. Furthermore, the WSOP Winter Circuit champion not only reels in the lion’s share of a $10 million, yes you read that correctly, prize pool but also joins GGPoker’s Team Champions!

Every event on the bustling $150 million guaranteed WSOP Winter Circuit schedule deserves your attention, but a handful of tournaments, naturally, stand out from the crowd.

Of course, the $1,700 buy-in Main Event is the WSOP Winter Circuit tournament that everyone wants to win, not least because it has a giant $10 million guaranteed prize pool up for grabs.

There’s also the $1,500 Merry MILLIONAIRE Maker, which has $5 million guaranteed and promises to turn yet another in a long line of GGPoker players into a millionaire.

Lower stakes players have the chance of playing for a huge pot in the opening event, the BIG 50 Bounty MILLION$ Kick-Off. It guarantees $1 million will be won despite its affordable $50 buy-in.