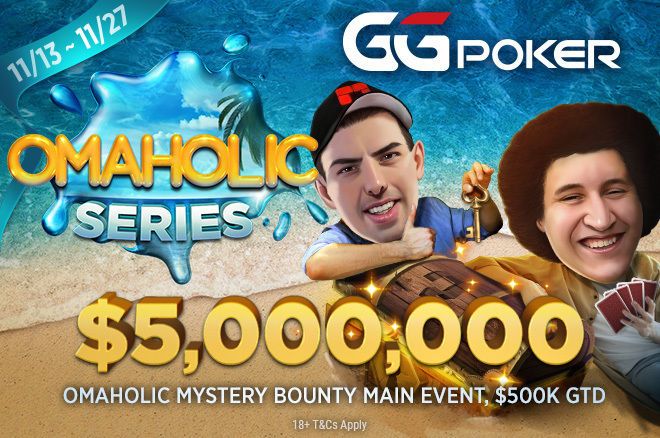 GGPoker flagship Omaholics Series to run for second time in 2022

The ever-popular Omaholic Series returns to GGPoker from November 13 and brings with it combined guarantees that weigh in at a cool $5 million. Online poker players are used to playing for big money in No-Limit Hold’em tournaments, but now it is the turn of Pot-Limit Omaha aficionados to bag themselves some huge prizes and prestige among the poker community.

Paul Burke, Head of PR at GGPoker, called for all PLO players to flock to GGPoker for the $5 million guaranteed Omaholic Series.

“it’s time for all lovers of Omaha poker to mark their calendars; their favorite tournament series is coming back! There are millions in cash prizes to be won and an Omaha Mystery Bounty Main Event to cap it all off; this Omaholic Series will be special.”

The Omaholic Series runs from November 13-27, and its schedule is made up entirely of Omaha tournaments that have buy-ins starting at only $5.40 and increasing to $5,250. Thousands of PLO specialists, including GGPoker’s OmahaSquad, made up of Fernando “JNandezPoker” Haebegger, Mikhail “Minthon19” Yakovlev, and Leon Hsu, will take to the GGPoker virtual felt, receive four hole cards, an attempt to become a Omaholic Series champion.

Each of the Omaholic Series events will be fiercely fought over, but it is the $500,000 guaranteed Main Event that has Omaha lovers tingling with excitement. Each of the 12 Day 1s costs $210 to enter, and players receive a 25,000-chip starting stack. Blinds start at 100/200/25a, and continue until only 12% of the field remains or the 18th level concludes, whichever comes first.

Players are permitted to play in as many Day 1s as they wish. Reach Day 2 more than once and all your stacks are combined into one and carried forward to Day 2, which shuffles up and deals at 8:30 p.m. GMT on November 27. Reaching Day 2 should be the minimum goals Omaholic Series Mystery Bounty Main Event players aim to reach because it is here where the mystery bounty element comes into play.

Bust an opponent on Day 2, and you get your hands on a mystery bounty prize. There are $250,000 worth of mystery bounties guaranteed, with a $50,000 top bounty prize nestled away somewhere waiting for you to claim it! Your first chance of progressing to the mystery bounty stage happens at 7:30 p.m. GMT on November 17.

With so many incredible PLO tournaments on the Omaholic Series’ schedule, it is challenging to handpick a handful of highlights. That said, the $5.40 buy-in Omaholic Mystery Bounty MILLION$ stands out from the crowd thanks to it featuring a $100,000 prize pool for such a small buy-in. The final stage of this event takes place on November 19.

The biggest event, in terms of guaranteed prize pool, runs at 4:30 p.m. GMT on November 13. The Bounty Hunters HR Main Event commands a $525 buy-in unless you win your way in via satellites for a fraction of the cost, but you get to play for a slice of a guaranteed $1 million!